MCGO
Home News Youth action: The schoolyard of the SS “Jane Sandanski” with a new...

On May 31, 2019, more than 100 young people from Strumica organized a volunteer action for arranging the yard of the “Jane Sandanski” secondary school, with the support of the Municipality of Strumica and the USAID Youth Ethnic Integration Project. The action brought together students from the “Jane Sandanski” and “Nikola Karev” secondary schools and it was also attended by the Mayor of the Municipality of Strumica, Kosta Janevski, the Chargé d’Affaires at the U.S. Embassy in Skopje, Republic of North Macedonia, Micaela Schweitzer-Bluhm and Chief Master Sergeant Mark Weinandt of the Defense Attaché Office at the U.S. Embassy in RNM, as a representative of the United States European Command. The youth cleaned up the trash in the schoolyard, arranged the green spaces and placed jardinières, replaced the damaged boards on the benches and painted the concrete structures in the schoolyard. The youth action is a final product of the long-term process supported by the Municipality of Strumica and the USAID Youth Ethnic Integration Project, in cooperation with the Youth Educational Forum. At the beginning of the month, the students had a joint meeting where they met each other and identified the problems in the city that they as young people face. As a challenge for which they expressed their desire to help to overcome, the youth singled out the schoolyard of the “Jane Sandanski” secondary school, which had been in a poor condition until very recently. This school year, the Municipality of Strumica in partnership with the Project, renovated two schools with financial support from the United States European Command. In the “Jane Sandanski” secondary school, a thermal facade was installed in the northwestern part of the school building, while in the “Marshal Tito” primary school, an interfloor construction (panel) was placed in the school building floor and the existing floor was replaced in part of the classrooms. 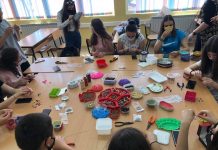 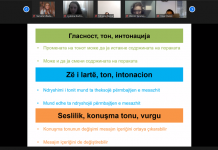 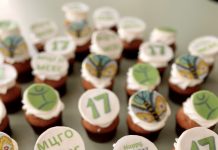 Joyous atmosphere at the public presentation of the joint student activities