MCGO
Home News Through joint classes to better interethnic integration of young people in the...

On December 10, 2019 in Skopje, a promotional event for joint classes with students studying in different languages of instruction in the City of Skopje was held, which was organized by the City of Skopje and the Ministry of Education and Science, with the support of the USAID Youth Ethnic Integration Project and the OSCE Mission to Skopje.

During the event, the students and the teachers shared their personal experiences from the positive impact of the joint classes on the young people, and the results of the conducted researches for this initiative of the City of Skopje were presented. About 90% of the students from different ethnic communities socialized, communicated and made new friends during the classes, and 80% of them would like to have joint student classes in the next school year as well.

Among those attending the event were the Mayor of the City of Skopje, Petre Shilegov, the Minister of Education and Science, Arber Ademi, the USAID North Macedonia Country Representative, Erik Janowsky, the Head of the OSCE Mission to Skopje, Clemens Koja, as well as representatives of the educational institutions, students and teachers.

“The idea of ​​the joint classes is to encourage the young people to respect diversity, not only within the education system, but also in all spheres of life, because that is the right thing to do”, said the Mayor of the City of Skopje, Petre Shilegov.

The Minister of Education and Science Arber Ademi added, “Building a society for all and fostering harmonious relationships based on respect of diversity are also among the fundamental principles in the new Law on Primary Education and the National Strategy for Development of the Concept of One Society and Inter-culturalism in the Republic of North Macedonia.”

“In the United States, we learned a long time ago that having an education system in which the students are separated leads to divisions that cause social tensions in the society. That is why it is important to provide opportunities for students from different ethnic communities to come together and develop a shared experience, learn to trust each other, work together in the school and take the trust and sense of collegiality and cooperation to their communities as well”, said the USAID North Macedonia Country Representative, Erik Janowsky.

The Head of the OSCE Mission to Skopje, Clemens Koja believes that the progress made in this area is big.

“A few years ago even the joint extracurricular activities seemed like a utopia. But thanks to the dedication of the institutions, the local community and the schools, the students can now learn in multiple languages ​​during the regular classes. These are the beginnings of the inclusion of the interethnic integration in the education as a key part of building an inclusive society”, said he.

The joint classes improved the interethnic cooperation and integration among the students from different ethnic communities and strengthened their civic and democratic values. During the second semester of the school year 2018/2019, over 700 joint classes were held, with over 450 students participating. 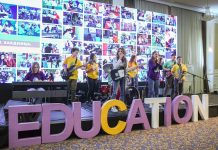 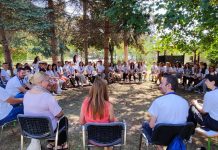 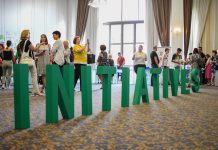 The young people from Stip with a humanitarian action