Young people showed their proactivity and initiated youth actions in their communities. The actions arose from their online workshops and meetings in recent months where they discussed the challenges and presented creative solutions for improvement of the situation in their environment. Through online advocacy meetings for the identified priorities, they provided the necessary support for the realization of their ideas.

Aware of the importance of environmental protection, the students from the primary schools “Kiril i Metodij” and “Goce Delchev ” and the secondary school “Kocho Racin” from the Municipality of Sveti Nikole initiated the cleaning of the new city park by the Municipality in compliance with all protection protocols. Trash cans, benches, and a gazebo were also installed, giving the park a more beautiful and modern look. Thanks to their proactivity, young people now have a place where they can socialize and have fun.

The park behind the Museum of Rare Minerals in Probishtip was also beautified with new urban equipment. Based on the Strategy for Interethnic Integration in Education, the Municipality supported the youth initiative of the students from the primary schools “Brakja Miladinovci” and “Nikola Karev” and the high school “Naum Naumovski Borche”. After several online meetings, they decided to realize the idea for ​​enriching the park with benches, trash cans and similar equipment.

“We are happy that we have contributed to raising the environmental awareness, landscaping and beautification of the park. All of us who have so far avoided the park because of its appearance, hope that now, with the installation of the new urban equipment, it will be one of our most frequent places to hang out,” said the students.

In Vrapchiste, in compliance with the protection protocols, the young people beautified the yard of the primary school “Vrapchiste”. They planted trees in the yard and set up trash cans.

These actions are supported by the Municipalities of Sveti Nikole, Probishtip and Vrapchiste and the USAID Youth Ethnic Integration Project in cooperation with the Youth Educational Forum. For the forthcoming period as well, several such actions are planned for improvement of the situation in different municipalities across the country, in which more students will be involved. 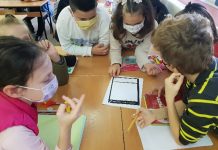 Playful activities with FACE in the PS “Kiril i Metodij” – Tetovo 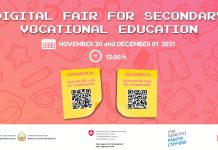 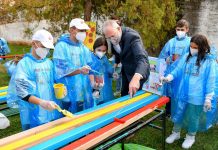 Students from Vinica restored benches and beautified the public space

The activities within the Idea Fusion Center commence