“Air is a precondition for life regardless of gender, age, ethnic background, and that is exactly what brought us at one place, on this roundtable to discuss the air pollution in the city, the types of pollutants, the illnesses and the proposed measures for overcoming the problem”- this were the words that opened the roundtable on the topic “PM Particles in the Air – A Constant Murderer of All” organized at the beginning of April 2018 in the premises of the “Goce Delcev” primary school in Bitola.

The excessive presence of PM particles in the air has been a subject of interest to the students from the Geography school club for a longer period of time now because they participated in an educational lecture about the impact of the PM particles on the air quality and the harmful consequences for the health of the population, organized by the Regional geographical association Geosfera. In order to raise public awareness about the problem, these twenty students who study in different languages of instruction organized a roundtable which was attended by students, teachers, parents and experts in the field.  At the start of the event, the students presented the research in front of the guests and they proposed measures for reducing the excessive air pollution.  During the roundtable, the floor was taken by doctor Martin Micevski, Nesat Azemovski, a representative of the NGO “Biosfera” and Julijana Ilievska, Inspector of Environment in the Municipality of Bitola.

Despite the fact that the participants proposed a large number of concrete measures for reducing the air pollution and protection of the environment, the most important conclusion drawn from the debate was that an intensive and continuous work should be done in order to educate and raise the awareness of the population.

“In addition to the goal to raise the environmental awareness, the activity contributes towards the development of the students’ skills of communication and cooperation which are necessary for mutual interaction, interaction with teachers, parents and other adults from different ethnic communities. In fact, this is the way we are creating values for interethnic integration of youth in a multicultural society”, said Biljana Stojkovska, eco-coordinator in the school. 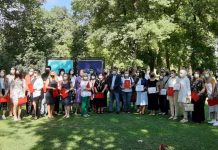 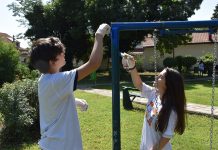