About 15 students from “Cvetan Dimov” secondary school from Cair who are members of the school drama club, under the mentorship of their teachers, organized a humanitarian theater performance in the past period. The collected funds were donated to the “Idnina” special primary school which works with children with difficulties in their psychophysical development.

Read the interview with Dafina Provolija, a student in “Cvetan Dimov” primary school and learn more about the young people’s initiative, supported by the USAID Youth Ethnic Integration Project.

This is the first time that students of Albanian and Turkish languages of instruction participate together in the school drama club. Taking this into account, what were the preparations for the play like?

This was an important process in which we had the opportunity to socialize with students of other ethnic backgrounds. In our school, there are students from Albanian and Turkish ethnicity. I speak both Albanian and Turkish, so I helped everyone to communicate with each other.

For the performance, we rehearsed twice a week for four hours. The story in the play depicts our everyday life and the problems that we all face as young people, regardless of the language we speak. We also showed the disagreements between young people and their parents, the dissatisfaction with some issues in education and society, the way emotions affect the educational process in adolescents, and the way in which young people express their dissatisfaction with their income.

We stressed that all young people complain about their income, because as young people we need a lot in order to be happy. But when we see that there are people who are in need of bare necessities such as clothes, then we become more aware that we should appreciate what we have and not complain about everything. With the collected funds, you bought clothes and donated it to the “Idnina” special primary school. Why did you decide to donate the funds?

We chose to donate it because we wanted to raise awareness among our classmates about such humanitarian actions. These activities we do are truly an example for all students in the school. When they see us involved in such activities, they also become interested in learning how to participate in such activities. It is a fact that sometimes adults should learn from us. For example, when I participate in such activities, my parents are always proud of me because the humanity that we as young people show definitely affects the adults. We show them that they too should be more active in such humanitarian activities. What kind of message do you want to send to young people?

My message to young people is to appreciate what we have and put ourselves in the shoes of those in need, and to encourage other people to help more. 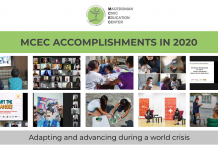 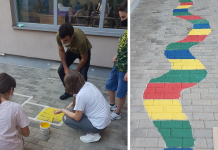 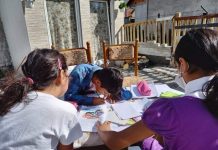