On 6 November 2018, a round table was held on the topic of “The role of schools in promoting interethnic integration”, which was attended by the directors and the coordinators of the School Integration Teams (SITs) from all secondary schools in the City of Skopje. The roundtable was part of the activities of the USAID Youth Ethnic Integration Project and it was organized in cooperation with the Ministry of Education and Science, the City of Skopje, the OSCE Mission to Skopje and the Youth Educational Forum.

At the beginning of the event, Daniela Adamova, the Head of the Education Department within the City of Skopje, underlined the successful cooperation thus far of the City of Skopje with the secondary schools in the process of interethnic integration in education. “As you all know, this process began in 2012 and it is an important element of the education system. More particularly, that is the case because we enable the young people to have different opportunities for more intensive cooperation, greater interaction regardless of the ethnic background and to jointly carry out activities which are of interest and importance to them. We, as the City of Skopje, believe that the intensification of the inclusion of the secondary schools is the key to more successful activities and happier young generations who will learn that we are richer for our difference while at the same time share all our common interests”, said Adamova.

Further in the event, Nuran Kadriu Dzambazi, an advisor at the Ministry of Education and Science, touched upon the joint commitment of the educational institutions to promote the values of the integration in education, while placing a special emphasis on the role of the Working Group of the MoES in the interethnic integration in education. Nebojsa Mojsoski, Chief of Party of the USAID Youth Ethnic Integration Project within the Macedonian Civic Education Center and Jelena Brajovikj, representative of the OSCE Mission to Skopje talked about the support of the schools by the civil society organizations and the international donor community.

In her opening remarks, Olivera Velickovska, the pedagogue of the secondary school “Brakja Miladinovci” from Skopje, shared some examples of good and successful practices followed by the teachers and the students in nurturing and practicing interethnic integration in her school.

“Our school conducts joint classes with students who study in different languages of instruction within the regular teaching process, at least twice during the school year. We also organize a number of workshops and free classes with multicultural content. Such activities make it possible to foster the values of living together both within and outside the school”, said Velickovska. The directors and the representatives of the secondary schools actively joined in the discussion and shared their good experiences, but also the challenges they face in the process of enhancing the cohesion among the students from different ethnic communities. One of the concluding observations was the need to promote the cooperation between the schools, the institutions and the civil society organizations in order to ensure long-term sustainability of the process of interethnic integration in schools. 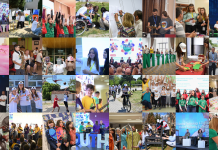 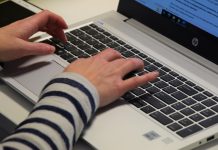 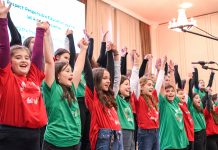 Students from the Idea Fusion Center learned how to think creatively