More than 250 guests – students, teachers, representatives of the key educational institutions and representatives of USAID had the opportunity to attend the public presentation of the joint student activities that took place in mid-October, 2018 at the Youth Culture Center in Skopje. The presentation celebrated the dedication of the students and the teachers in strengthening interethnic cooperation through their participation in a series of joint student activities in the course of the past school year.

Before the beginning of the event, the attendees had the possibility to see the products made by students from several schools presented on a dozen stands.

The students from “Zivko Brajkovski” in Butel presented a creative model of the Solar System, whereas the young people from “Brakja Ribar” in Tabanovce, Kumanovo presented a model of their school. The students from “Gjorgji Sugarev” in Bitola shared their “Code of Мutual Respect” and showed us how important it is to foster mutual cooperation, whereas the students from “Marsal Tito” in Strumica talked about the importance of our traffic behavior and traffic culture in general, by presenting their traffic safety campaign. The students from “Pero Nakov” in Kumanovo shared their ideas on how to make their city more appealing. The young chemists from “Goce Delcev” in Bitola demonstrated how the quality of the water can be examined, whereas the ecologists from “Vera Ciriviri Trena” in Debreste, Dolneni combined creativity and education and made beautiful t-shirts with eco messages.

After the end of the exhibition on the stands, the guests took great pleasure in watching the interesting animated video with powerful messages that should reach all of us.

Immediately afterwards, the guests watched three beautiful theatrical and musical performances. The students from the secondary medical school “Gostivar” in Gostivar performed the play “Simply Strange Stories” in which they presented the challenges of young people in a highly creative way – through famous characters from the stories. The following play called “Youth at a Crossroad” was performed by the students from “Kiril Pejcinovikj” in Tetovo. In the play, they presented life as seen by the young people in Tetovo.

Furthermore, the students from the primary school “Marsal Tito” in the village of Murtino, Strumica, who won the first place in the category group mask for 5-10 participants at this year’s Strumica Carnival, delivered the musical performance titled “Jolly Garden”. At the end, as an official closing of the event, the guests had the opportunity to watch the performance of the school band Roma Rock School. The joint activities showcased at the event are only part of the activities conducted in the schools throughout Macedonia within the USAID Youth Ethnic Integration Project. In the past 2017/2018 school year, more than 1300 students and teachers worked together to strengthen interethnic cooperation and promote civic values, especially among young people. More than 400 joint student activities, youth initiatives, creative workshops and public discussions have been organized.  The purpose of such activities involving young people from different ethnic backgrounds is to improve the interethnic cooperation and integration among them, as well as to strengthen their civil and democratic values. 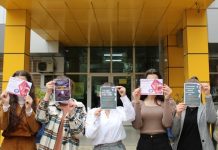 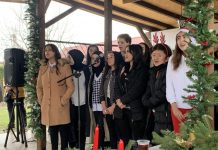 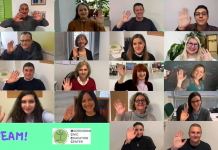 Youth action: The schoolyard of the SS “Jane Sandanski” with a...